The Fourth of July again delivered better than promised.  A little hot for some, I think the weather was perfect.  It was warm early enough that short pants were in order, peaking midday with perfect picnicking weather, as long as you could find a good shade tree.  The evening brought its normal cooling but without the fog, which sometimes obscure the fireworks.

We began our day with a quick breakfast at Hallie’s, followed by the short ride out to Penngrove to join us with the rest of the family just in time to secure a good viewing spot for Penngrove’s “Biggest Little Parade.”  A Fourth of July tradition in our family and from the looks of it we aren’t the only ones.  I learned yesterday that the first year I attended the parade, as a five-year-old Penngrovian, was in fact the parade’s first year.  I can’t claim continuous attendance since its 1976 inception but I make it whenever I can. 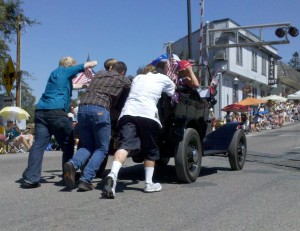 The parade was wonderful as always.  It was colorful, vibrant, energetic and patriotic.  The parade was dedicated to all our past, present, and future soldiers, with the simple theme of “America,” as has been the tradition since its inaugural year.  The crowd was a good size but as always, it was easy to find a place to squeeze in and get a good view.  At about 45 minutes long, it was the perfect length.  Just about the time I was starting to look for shade, the parade ended and the masses emptied the street and funneled into the park for the post-parade picnic. 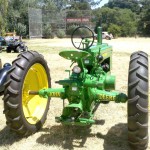 We were pleasantly surprised to see the food gittin’ process has grown more efficient from years past.  The process is seamless, with a maximum of five minutes elapsing between the start of the ticket line and our butts hitting picnic bench seats, ready to start our meal.  This included one of us wandering off to get banded and beered.  The BBQ was great, as was the always reliable table of homemade 4-H Zerts.  A Penngrove fundraiser isn’t complete without a table full of diverse Zert choices, all for a dollar a piece.  At that price, we tried three just to see which one was best…but found them all to our liking.  The GF liked the white cake best while I preferred a multi-color, teeth-dying number with flavors of chocolate, mint, and strawberry.  Strange looking but delicious, which was an appetizer of things to come.

The parade and picnic drew a crowd of 2,000+, which is enough to make the town and the park festive without make it uncomfortable.  Along with great pit beef, chicken, and sides, there was a live band, a beer and booze garden for some “adult” visiting, BBQ oysters and lots of opportunities to enter raffles or drawings, all proceeds going to help the Penngrove Social Firemen in their bid to replace the park’s aging playground equipment. 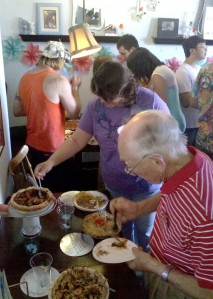 Within a stone’s throw, Humble Pie (a county wide favorite eatery) was launching their Inaugural Strange Pie Contest.  We weren’t able to stick around for the voting results, but I will write in more detail about it once I receive the list of winners.  A sneak peak – with categories of “Sweet,” “Savory,” and “Strangest” I can tell you that my favorite was also the one I voted for as “Strangest”, which was a peanut butter, yogurt and pickle concoction entered by gentlemen who had to have eclipsed the average age of attendees by at least double.  It is always nice to see our older citizens staying involved, even when the event might be of questionable or culinary value.  My favorite for “Sweet” was entered by our very own Heather Irwin, local Press Democrat food critic.

We finished out our evening with a family BBQ of tri-tip, salad with ingredients from my garden, some great wine, and one of the best fireworks displays I have seen in years.  (The wine was Cameron Hughes’ RockRidge Meritage, and seemed like a steal at $3.99 per bottle.  We found ours at Groco.)  We watched the fireworks from the west bank of the river and with unimpeded views, it was spectacular.  Personally, I would rather have them all shot off at once, but I don’t think our windows could take the concussion.  In case you are wondering why there seemed to be additional fireworks show after the finale, here is my understanding.  The fireworks fuses are tied together somehow and set off through a master control board.  Some of them don’t fire properly so after the finale, these are lit off by hand, giving us two fireworks shows for the price of one.  There are plenty of cities, such as Rohnert Park, that have put their fireworks displays on hiatus so once again, I feel lucky to live in a town with traditions worth saving.

I hope everyone had a great Fourth of July; I look forward to meeting more of you at next year’s festivities.  Keep an eye out for my “Save the Date” midweek blog as well as my review of the upcoming weekend’s events – “Petaluma Weekend.”