Beer and Cheese @ The Big Easy 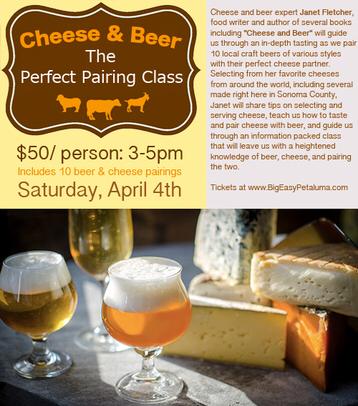 I have it on good authority (as well as personal experience) that contrary to popular belief, cheese actually pairs better with beer than with wine. I can’t remember the chemistry exactly, but attend Janet Fletcher’s event at The Big Easy and you will learn all about why beer pairs so well with cheese. (I know, that’s almost blasphemy considering we are in the heart of wine country…but then again, we are also in the heart of beer country now too, so it’s time to learn about cheese and beer.)

I had the pleasure of attending last weekend’s California Artisan Cheese Festival and learned a lot about cheese…and beer. Hosted by the Petaluma Sheraton, the Festival included farm tours, seminars, and lots of cheese tasting. Although my media pass allowed me to pop into all the seminars, I was forewarned that it would be a mistake to miss any seminar that Janet Fletcher was teaching. Because of this, I parked myself front and center in Janet’s “Cider & Cheese” morning seminar, and boy am I glad I did. It was so good that although I had to jump around in the afternoon in order to see all the other seminars, I returned to Janet’s “Hop vs. Malt” seminar as soon as I could.

Janet was a genuine pleasure to meet and learn from. She could probably teach anything, but thankfully, she knows a whole lot about cheese, which is what we were there to learn about. One of the best parts was that before giving her own opinion, Janet looked to the class for our personal taste preferences. Recognizing that our palates often have slight variations, it was interesting to hear what others were experiencing, and then comparing that to what I was experiencing. It made her classes interactive, entertaining, and informative. Janet helped open our eyes, and our taste buds, to the distinctive flavor difference from cider to cider and between the two primary styles of beer, especially when paired against the plethora of local cheeses we have available to us.

Just as a comparison, the Festivals seminars are $65-$95, are held in a boring conference room, and only paired two beers with the cheeses. By contrast, Janet’s class at The Big Easy only costs $50, is held in a great location, and will pair 10 beers!!! with her favorite cheese from around the world, including several that are locally sourced.

This is an experience you won’t want to miss.