For most, the holidays are all about family, friends, …and food. Coming together around an overflowing table of holiday specialties is one of life’s simple pleasures. For many, though, relaxing over the holidays means steering clear of the kitchen…and the inevitable cleanup. Statistic show that a growing number of people around the country are choosing to dine out on holidays, but Petaluma diners should call ahead as most restaurants have restricted holiday hours.

The best known holiday dine-out tradition dates back to the late 1800’s in New York City. In NYC’s Lower East Side it was commonplace to find American Jews dining at Chinese restaurants on Christmas. First, a large portion of the Jewish population still adhered to kosher dietary restrictions, one of which forbids eating dairy with meat. Because Chinese cuisine is relatively dairy-free, this was a natural choice when Jews dined out at any time of the year. The Chinese and Jews also had no previous history, so anti-Semitism was rarely an issue. Additionally, Chinese restaurants were normally free of Christian symbols, unlike their Italian, German, Irish, and French counterparts. But the most obvious reason for this Christmas tradition was that, at least in New York City, Chinese restaurants were the only ones open on Jesus’s birthday.

An anecdote on this tradition comes by way of now Supreme Court Justice Elena Kagan’s 2010 Senate confirmation hearing. Senator Lindsey Graham, in an effort to highlight the previous Christmas day airline bombing attempt (in Detriot), pointedly asked Kagan where she had spent Christmas. She famously replied, “…like all Jews, I was probably at a Chinese restaurant.” This brought laughter throughout the chambers and lightened the overall mood. 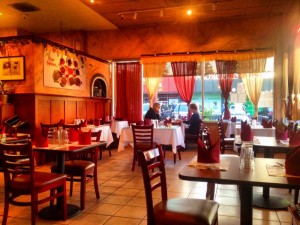 In a culinary haven like Petaluma, one might think holiday dining options are plentiful. But as this food writer found out the hard way, Petaluma holiday dining options are few and far between. Holiday dining usually requires reservations, but that is of secondary concern if you do not even know which restaurants are open. After exhaustive research, I have concluded that most Petaluma restaurants are either closed on Thanksgiving, Christmas Eve, and Christmas, or else they have yet to set their holiday schedule. However, a few have already planned for the holiday season. 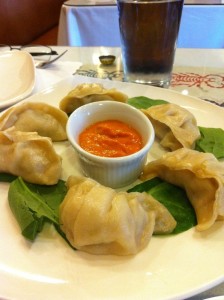 One of the consistent standouts for holiday dining in Petaluma is Asian, although not Chinese. Everest Indian serves delicious Indian, Nepalese and Tibetan dishes, and is open every day of the year, from 11am – 3pm & 5 – 9pm, including Thanksgiving and Christmas. Everest is a year-round favorite so it is great to know their apricot chicken, coconut curry, samosas, momos, tikka masala, naan pizza, dal, and fish tandoori are available on the holidays as well. Their food is excellent, the prices are reasonable, and the service is as down-home as you will find anywhere. Nothing will put you into the holiday spirit like seeing the smiling faces of owners Gopal and Menu Pun.

Major kudos to Palms Grill (corner of Washington Street and McDowell Blvd) for keeping their website updated and for not only offering holiday specials, but for doing so at holiday friendly prices. Nothing kills the holiday spirit quite like getting gouged, especially for those dining alone. Palms is open from 7am – 10pm on Thanksgiving, just like normal and offers several specials including an oven roasted turkey dinner ($16), an 8 oz. ($22) and 12 oz. ($24) prime rib dinner. All come with ample fixings and for a few dollars more you can add a slice of pumpkin or pecan pie. I highly recommend at least one order of deep fried pickles too – you can thank me later. And for the kid in all of us, Palms serves breakfast all day.

Other dining options for Thanksgiving include FoodBar and Petaluma Market (hot food to go), both of which are open from 8am – 3pm. Tolay is open 1-8pm, while City Limits is open 6am – 10pm. For those that would rather stay home on Thanksgiving, Bellyfull Dinners offers the next best thing to having your own personal chef. Dinners are delivered right to your door and merely require re-heating. If handmade pies are your thing, make sure to order ahead from Bovine Bakery and/or Petaluma Pie Company.

Christmas Eve has a few more options than Thanksgiving, including quite a few Asian cuisine choices. Canton, Chinatown, Everest (of course), Flowering Tea House, Hunan Village, Jenny Low’s, Kwei Bin, and Lily Kai, are just the ones I was able to reach for confirmation. For something more traditional, Luma, Wild Goat Bisto, Risibisi, City Limits, Corkscrew, and Palm’s will run their regular hours. Dempsey’s and FoodBar will close at 5pm, while Old Chicago Pizza and Graffiti will be open a little later. Seared has limited hours, from 4-8:30pm. Although their menu is always special, Speakeasy/Big Easy will run an extra special holiday menu during their limited hours of 5-9pm.

Christmas day is as thin as Thanksgiving, as far as restaurant choices are concerned, with Everest, City Limits, Andy’s Sushi, and Palms Grill doing the heavy lifting. Keep your eyes on Palms’ website for their special Christmas menu.

New Year’s Eve has a lot more options but a few noteworthy choices include a pre-fixe menu at both Bistro 100 and Seared, and a extra special menu at Speakeasy/Big Easy, with music from Royal Jelly Jive. Twisted 2 and Le Bistro are open, but as romantic favorites, reservations are required. Sugo, Rosso, Luma, Graffiti, and Wild Goat are all open but because they do not accept reservations, be ready to enjoy a glass of wine at the bar while you wait for a table. Petaluma’s newest restaurant, Thai River, will also be open for those looking to try something new.

Obviously, planning ahead will save you and your family much frustration. Driving around searching for dining options, your hunger pangs multiplying by the mile, is not an ideal way to spend a holiday evening out. However, even if your decision is in the spur of the moment, Petaluma offers choices, so long as you know where to look.