Along with being one of the only places in town serving food into the witching hours beyond midnight, Speakeasy now serves brunch on Saturday and Sunday from 10am-5pm.  Yup, if you want a great brunch but don’t get up super early, you can mozy on down any time before 5pm for a world class brunch.  …and you get there after 5pm, you can expect an equally world class dinner.

Four of us went to try Speakeasy’s new brunch so we could get a taste of everything, and I can report back that everything is as to be expected – INCREDIBLE.

-Don’t bother…just stop…don’t even tell me ‘I don’t  like donuts’ or ‘bacon on donuts? …ewww’ or ‘I’m on a diet, I can’t.’  Just order them.  I know my bacon and I know my donuts and will never have either again anywhere, in combination or as separates, without thinking about these awesome donut holes. (I likely won’t ever have brunch again either without thinking about these awesome donut holes.   Did I mention they have bacon on them?) 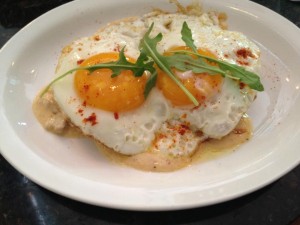 2) Buttermilk biscuits and homemade sausage gravy with two sunny
side up farm eggs.

-I am a HUGE fan of biscuits and gravy, even when it is thick and gummy as paste and gives you a mini heart attack with each bite.  I always order it as a test of a breakfast place’s meddle.  oh baby are Speakeasy’s spectacular!  I recommend you get this even if you don’t normally like biscuits and gravy.  This is on a whole other level.    It retains enough of the hearty flavor that is required from a biscuits and gravy dish but has an incredible grace that is hard to describe.  Comparing this to your standard biscuits and gravy is like comparing a mixed martial artist with a big dumb thug.  The thug will get the job done, but will leave you feeling like he forced you to eat a bowling ball, where as the mixed martial artists, with finesse, class, artistry, strategy, intelligence,and sophistication, will leave you feeling like you did your part, and will congraduate you afterwards for putting up a good fight.  This biscuits and gravy will lull you in because you think you have seen (and tasted) it all before.  But like the mixed martial artist, it will put you under its spell with the artistry of Brazilian Jiu Jitsu, Muay Thai, and Krav Maga before submitting you with Kimura, Omoplata, or a straight up Rear Nake Choke.  You won’t even know what hit you, but after it is all said and done, you will feel like you were art of something special, not just the victim of what showed up on the plate in front of you. 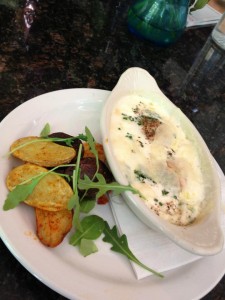 -I had never had baked eggs before but am now a huge fan.  I’m thinking of moving my egg cooking from the cast iron pan on the stove top into the oven to see if I can try to replicate Speakeasy’s flavor and texture. (Yes, one of the many benefits of cooking with cast iron pans instead of teflon is that you can bake with them too.  …you can even toss them on the BBQ to cook up beans, veggies, pineapple upside down cake.) 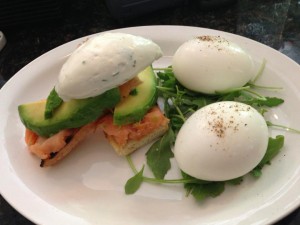 -There are a lot of words in that description that I don’t now…and I suspect some of them are french…but I won’t hold that against them…this time.  As a native of the area I’m grew up on salmon.  Although not a huge fan of fish, I try not to pass up on smoked salmon and boy am I glad I followed that habit here.  This dish has such a wonderful combination of flavors…which is saying a lot considering I am not normally a fan of avocado.  But as with everything  at  Speakeasy, I have learned that no matter what ingredient I may not be fond of,  if Speakeasy puts it in there, I’m not going to question it or shove it aside until I have tried it.  So far, the plates have all been licked clean. 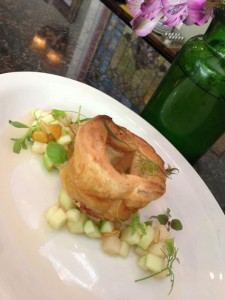 – I don’t know what this is (…again, I suspect it is french) …but know that we liked it so much we ordered a second one.  ‘nuf said.

(These pictures have been stolen from Speakeasy’s Facebook page because our brunches were devoured before I even thought of snapping any pics.  Yes, what you see is what you get.  The food looked as good in person as it does in these pictures…and tasted twice as good. (I highly recommend ‘like’ing their Facebook page – they post great pics and special events that you might miss otherwise.))