We found a local artist with handmade ornaments, fashioned from recycled antique-y kinds of things, like bells and balls and books.  We could not have been more excited.  The prices were steep compared with Walmart and 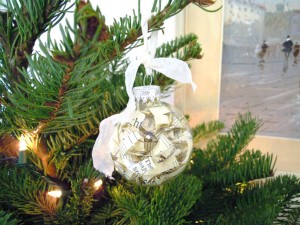 the Grocery Outlet, but we were being green …green squared.  We were buying from a local artist and were buying ornaments that used recycled materials.  There wasn’t a greener person in the room, and believe me, there were a lot of artsy-fartsy-hippy artist types there.  (I’m not hating on hippies – I was raised by hippies in a commune so I have much admiration and respect for people who try to change the world…but doing things like driving a VW bug is not green.  Driving a Hummer so we use up the oil as fast as possible, so we are forced to come up with viable alternatives…THAT is being green.  I’m just saying – there is nobody more green than me.) 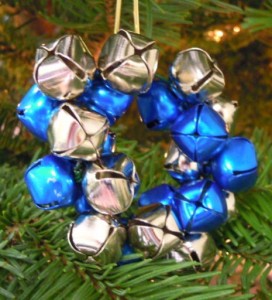 The ornaments were great.  And my partner, in unusual fashion, being that she was raised as a polite and apologetic Catholic, pulled out the big guns and asked the artist if she would give us a discount if we bought multiple ornaments.  I guess all that time in Europe last summer haggling with street vendors rubbed off.  Heck, I hadn’t even thought of that and nobody likes to haggle more than me.  The artist said yes, so we started to discuss which ones we liked and wanted, and which ones would take if priced well, fearful that this might be our only chance to buy locally made ornaments…and not wanting a half decorated tree.  Luckily, we were shooting for a small tree of maybe three feet in height, so along with some 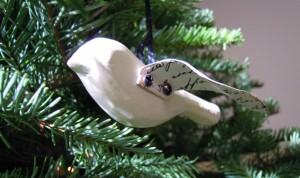 GE lights, we weren’t going to need a whole lot of ornaments.  Plus, the tree was going to go hard against the wall (meaning we were going to trim a good portion of one side so the tree didn’t push out into the room) so we thought we could take care of all our ornament needs in one fell swoop.  After looking through her wares, we promised to return on our way out, and moved on to look over the other tables (and so I could get my baked goods on.) 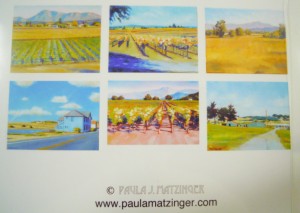 The next table offered some beautiful paintings, as well as blank greeting cards of these same paintings.  Having recently spent a miserable afternoon wandering around downtown Petaluma looking to purchase local cards, only to be thwarted at every turn, I started selecting some of these cards to purchase.  Maybe “miserable” is a bit harsh – I think I was mostly frustrated to find that although easy to buy local food, it is very hard to find other locally made products.  I was ready to spend big bucks but visited every store I could think of around downtown and came up empty handed.  Copperfields, where I have loyally spent way more on books than I would have on Amazon, had local(ish) scenes of Marin but the cards were made elsewhere.  (I found this at several location – local scenes on cards printed outside the area, some as far away as China.) 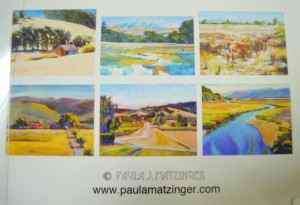 At Tuscan Gardens I found locally made cards but they did not depict local scenes.  Gallery One had a couple but they were of Marin and I wanted to send out thank you cards from where I live.  Nothing screamed out “Petaluma” (or at least “Sonoma County.”)  Petaluma Market, another place where I spend way more money on food than I would if I shopped at Lucky’s, also disappointed.  And don’t get me started on Papyrus – they appear to only carry their own stuff, so nothing local. 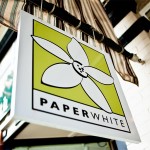 My last stop was at Paperwhite where I not only found Petaluma cards, but Petaluma cards made in Petaluma.  (Paperwhite is on Kentucky Street across from Mi Pueblo – yes, all my directions involving orienting yourself to food.)  The owner of Paperwhite had actually snapped the photos that were printed on the front of the cards.  I was also informed that I could email them pictures of my own and they would be more than happy to print them up for me.  When I got home I immediately emailed a few photos to my brother who is an artist for some touching up, figuring that if I am going to pay $2-$3 to someone else for their cards, I may as well pay for my own.  Now don’t get me wrong, I like to patronize those local shops (well, except maybe Papyrus) but was quite frustrated that after spending so much more money all these years shopping around downtown, now that I needed something really local, I couldn’t find it. 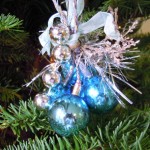 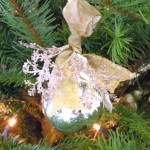 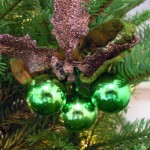 But I was keeping my hands free for baked goods so I made a mental note of which cards I was going to buy, while my partner eyed a nice 8×10 print that had caught her attention.  We moved on to the next table, on our way to the baked goods exchange.  We found a woman who knits and crochets.  Having just bought a baby hat made in Bangladesh, we were thrilled, and a little disappointed, to find an incredibly soft and colorful baby hat on display, next to several similar adult sized hats.  With those priced at $40 and above, we were hesitant to even ask for a price on the baby hat.

Luckily, the artist was busy with someone else so we proceeded to the exchange counter, where I turned in a few greenbacks in return for the requisite number of cookies, cupcakes, and rice crispy treats.  After brushing the crumbs from my face, we walked back towards the ornament lady, only to catch the baby hat lady free to chat.  We told her that we loved the hat.  She explained that it had actually started off as a full-size wool hat for an adult, but upon washing it, the hat had appropriately shrunk, as well as taking on a felt like feel.  She called it “felting” the wool.  We asked the price and she hesitated, which told us it was going to be expensive.  She hummed and hawed for a few seconds and then looked at us apologetically and said, “Would $15 be okay?”  ???…was she kidding?  For a second I thought maybe her and my partner had been talking about something else.  Maybe I was slipping into a sugar coma and hadn’t paid attention when their conversation had changed to a different item.  Nope, she was talking about the baby hat.  We enthusiastically accepted, telling her about our recent failed attempt to buy this same type of item at a local shop.  She was equally enthusiastic that it was going to a good home.  There are many nuances of making business deals face to face, and the two most rewarding I have found so far are knowing the person behind the product, and being able to strike a deal that makes both parties happy with the outcome.  Call me a sap with a hint of hippy, but that hat will always have good mojo.

We finally made our way back to the ornament seller, after a brief stop to buy the cards made by the local artist.  To keep a long story from becoming any longer, in summary, her stuff was very cool, very green, very local, and very much of her table was barren once we were finished with our shopping.

Now, on to the Christmas tree farm… 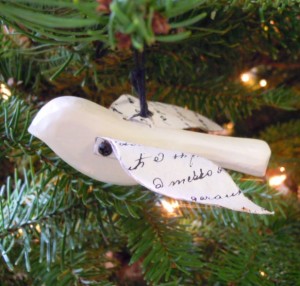 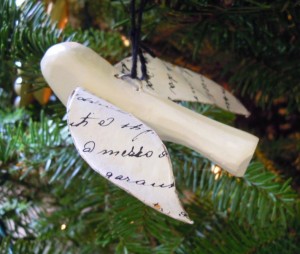 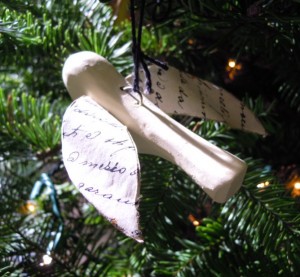