I overheard someone claim that “prosciutto” is the Italian word for “expensive Bacon.”  “From a pig,” yes.  “Delicious,” of course.  “Makes everything better!” si signora   …but prosciutto is not bacon, expensive or otherwise.  Due to the unique dry curing process, prosciutto can be eaten without cooking, and comes from a different cut of pork than does bacon.  Many (like me) will claim that although wonderful unto itself, bacon’s flavor pales in comparison to prosciutto.  However, because bacon and prosciutto are unique cuts of meat, they are usually used in cuisines differently, so don’t swear off bacon just yet. 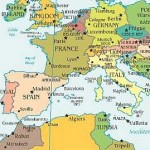 There is little in the U.S. that can compare to the quality of cut and sophistication of flavor in old world cured pork products.   Is Amurkin bacon great?  (To say “Amurkin” correctly, say “American” but give it a back-wood, hillbilly twang.)  Of course, but I encourage you to explore some of the cured pork offerings from around the world, especially the Mediterranean.   If you like bacon, even just a little bit, you will be more than impressed by what the Italians and Spaniards can do with a well-fed pig.

Also well fed, Amurkin bacon is almost always made from pork belly.  According to Wikipedia, bacon “is first cured in a brine or in dry packing, both containing large amounts of salt; the result is fresh bacon (also green bacon).  Fresh and dried bacon must be cooked before eating. Boiled bacon is ready to eat, as is some smoked bacon, but either may be cooked further before eating.”  Two distinctive non-belly bacons are “fatback,” which is quite fatty (surprised?), and “back bacon,” which is leaner and hales from the pork loin region… and is extra scrumptious.  Contrary to popular

misconception, the “loin” cut of meat, no matter what the animal, is not from the “loins” region we normally associate with humans (think Beastmaster in a loincloth?), but is instead harvested from around the top of the ribs and back.  It should also be noted, as long as we are clearing up some confusing terms, that pork “butt” comes from the shoulder area, not the rear end. 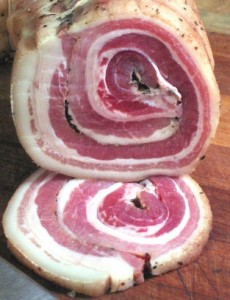 The closest thing to bacon outside the U.S. is pancetta, and it can definitely give bacon a run for its money.  Sold at a premium due to the time and effort it takes to produce, one might say that pancetta is the Italian word for “expensive bacon” but the extra cost is well worth it.   Don’t get me wrong; I love me some good old fashioned greezy bacon — in meatloaf, on a burger, next to eggs, and yes, infused into ice cream and chocolate bars — but I have yet to cook a recipe where pancetta doesn’t far outshine bacon.  Pancetta is normally dry cured (with spices), and is rarely smoked or served in strips like its Amurkin counterpart.  It is usually cubed for cooking, or else comes in a roll (or wheel) for slicing and serving uncooked, similar to prosciutto. 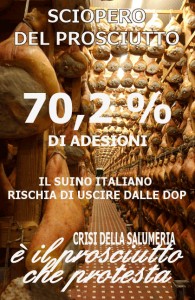 Cured meats from other countries, which we Amurkins like to call “bacon,” are usually some form of Jamon. That’s “ham” to you pedestrians.  “Ham” is a distinctive cut, harvested from a different part of the pig than bacon.  Prosciutto is the Italian word for “ham” and comes in dry-cured (Prosciutto Crudo) and cooked (Prosciutto Cotto) versions.  Being very serious about their prosciutto, the Italian goobermint regulates how prosciutto is marketed and only allows certain names, designation, and seals on their prosciuttos, depending on the distinctive flavor and quality, and usually specific to certain regions.

In france, they call their “ham” Jambon de Bayonne, but since it comes primarily from “Basque country” (southern france)  I prefer to call it “Basque” as opposed to “french.”  And as odd as it sounds, they pronounce Jambon exactly as it is spelled – “jam bone.” 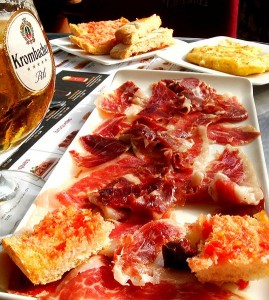 If you thought the Italians were serious about ham, the Spanish take their ham and their ham consumption to a whole new level, consuming twice that of the Italians.  Equivalent to Italy’s prosciutto and the Basque’s Jambon de Bayonne, Spain produces Jamon (pronounced “ha-moan”); Jamon Serrano and Jamon Iberico.  The former comes from white pigs; the later from black pigs with both being dry cured and normally served uncooked and in thin slices, like their Italian and Basque counterparts.  The Jamon Iberico is rarer than the Serrano and has been a delicacy since the Roman’s occupied Spain.  The Spanish are nuts when it comes to their cured pork and they have distinctive Jamon Iberico variants based on how the pig is raised, gaining distinctive and delicate flavors depending on what they are fed.

The Spanish are so specific that they have a separate designation for one of the most coveted Jamons, the Jamon de Pata Negra.  This Jamon comes from black pigs, which are raised in cork oak groves on the border of Spain and Portugal, and are range fed and fattened on acorns.  It does not get any more specific than that.  Another delicacy is Spain’s Lomo Ham, a dry-cured pork tenderloin, and probably my favorite of all the Spanish cured porks. 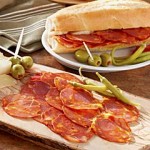 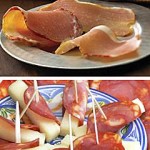 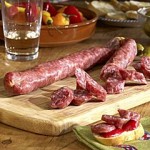 Since discovering some of these delicacies in a variety pack of cured Spanish meats, (purchased at Petaluma’s Grocery Outlet, no less!) I would be remiss not to also mention Spain’s chorizo sausage.  You may have had a chorizo burrito at your local Mexican restaurant or a chorizo taco from the Roach Coach in front of your local Pick-n-Pull auto dismantler, but Spanish chorizo is quite different than its Latin American counterpart.  As opposed to the Latin American chorizo which is a wet sausage that must be cooked prior to eating, the Spanish chorizo is dry cured and ready to eat, cooked or not.  It is kind of like a Spanish version of salami.  Also, Spanish chorizo has a more mature, distinctive flavor than its Latin American cousin.  Just as the old country has maturity and a depth of history, so does its chorizo, whereas the new world’s meats tend to have a more wild and aggressive flavor, as if to match its wild wild west consumers.

Although the Italians have a plethora of different sausages, the Spanish can certainly give them a run for their money in that department too, with varietals such as sobrasada, salchichon, and butiffaras.  And I must make special mention of longaniza, which consists of lean pork AND pancetta, and is cured by air drying, not cooking.  Any time a cured meat is created, at least in part, by using another cured meat, it calls for a special mention, if not its own special celebration… maybe even its own holiday or parade. 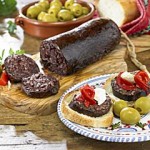 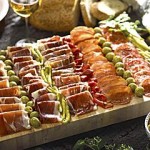 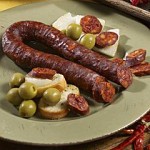 Until recently, many of these meats have not been legal to import to the U.S.  Our goobermint felt that our meat handling procedures were far superior to countries that have been growing, producing, and serving meats for longer than the USDA and FDA have been in existence.  (I would not be surprised to learn that they received heavy pressure from our meat industry in order to lessen competition with foreign meats in the U.S. market.)  In the not so distant past, what you may have been told was prosciutto, was for the most part produced in Germany, outside the Italian regions where that name is a guarded badge of honor, and rightfully so.  Blindfold anyone with even half a taste bud and they will pick out the true Italian prosciutto (Prosciutto de Parma) as the best of the bunch.  Moreover, most of the Spanish meats meant for the U.S. market were often raised and slaughtered in Denmark or Holland and then shipped to Spain for curing. 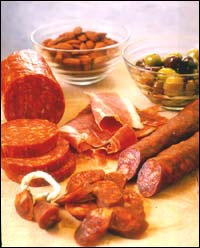 How do I know so much about pork?  I like to eat. I like to eat meat. And I think pork has the greatest variety and flavor offerings of all the animals I choose to consume.  Ever since learning to cook, I have always kept a healthy supply of pancetta and prosciutto on hand – that, plus a selection of Italian cheeses, balsamic vinegars, olive oil…and an Italian girlfriend and you could legitimately call our kitchen “Little Italy.”  It is not unusual to also find some Jamon Serrano, Lomo or chorizo tucked in a back corner of my fridge, waiting for a “special occasion.”  …and in our kitchen, being hungry qualifies as a special occasion.

So what?  Who cares what it is called, what part of the pig produces it, or what region of the world it arrives from… it all taste so freakin’ good, right?  Well, even if you are not a connoisseur of pork products, it is good to know that there is a whole big world of cured pork available to you, if you so choose to explore it. If this has put you in a cured pork-craving mood, I suggest the prosciutto, brie, and fig Bruschetta Trios at Sugo.

In the immortal words of Homer Simpson, “Mmmm…Bacon.”   …or maybe more appropriately, “Mmmm…Pancetta.”